The Olympics is the epitome of human condition and competition, regardless of the season it is held. These athletes must be kept in optimal condition at all times, and that’s why these people are constantly supported by a team of medical experts. A KLS.com story published February 20, 2014 details the story of one of the members of Team U.S.A.:

Skis and knees bouncing back and forth and highlight-reel crash landings — this is moguls skiing. And when a U.S. athlete takes a big fall Doug Flint is there to help.

For now, Flint's home is in Sochi for the 2014 Winter Olympics. Flint normally works as a physical therapist at McKay-Dee Hospital in Ogden. Four years ago, however, he started working at a jump camp for skiers, and that position led to this job with the U.S. Moguls Ski Team.

"Well, I think with a lot of things in life being in the right place at the right time is a big part of it," Flint said. "And then taking that opportunity and going with it."

Flint's main job with the team is as a physical therapist, and he certainly has been busy. Moguls skiers put a lot of stress on their knees, legs and backs.

Flint helped keep athletes in their top physical form in order to perform well when it was their time to compete. Athletes who want their bodies to benefit likewise can take advantage of Ealing physiotherapy services. 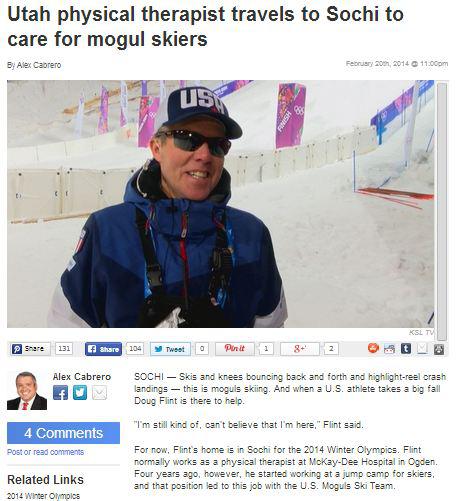 Accidents can happen to anyone in any city in the world, and London is no exception. As London is also a football-crazy city, injuries to the knee and foot are unavoidable realities to players there. Other common injuries that Londoners have to deal with include hamstring strains and back pains.

Anyone who has endured such physical injuries should not hesitate to call a service that offers physiotherapy in Ealing. A service like CK Physiotherapy can help patients improve the conditions of their injuries and help prevent the possibility of re-injury in the future.

There’s no need for injured people, both athletes and non-athletes, to live with their erratic bodies. Able physiotherapists can help them correct and heal their problematic body parts to their former conditions.