Holistic Physiotherapy in London: Helping Keep Players on the Field

Sports-related injuries are perhaps the biggest reason why physiotherapy practices in the U.K. are necessary. Nobody can agree more than professional rugby player Kayle Connor of Workington Town who, according to News & Star, has to quit the game temporarily due to a career-threatening injury. He’s now returned to his home in Brisbane, Australia to recuperate, though he intends to return to England sometime in the future: 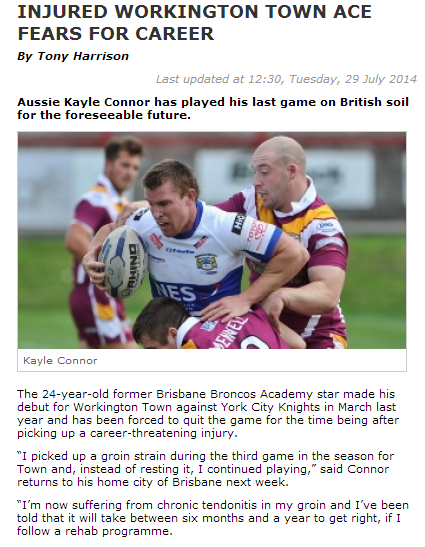 “I’m now suffering from chronic tendonitis in my groin and I’ve been told that it will take between six months and a year to get right, if I follow a rehab programme.

"I had an MRI scan a month ago and discovered the real damage. I’m gutted. I want to be playing but I can’t run, train or even walk without pain. I’ve seen a physio in Kendal and he has given me a strict rehab programme. I must stick to that when I get home or I might never play again.”

Connor’s condition is no simple matter as the tendons in his groin are likely to have been strained or over-stretched, while any unaided movement may cause further or even irreparable damage. It’s a good thing, then, that he went to seek professional help in the form of soft tissue massages and exercise therapies—treatments typically offered at a holistic London physiotherapy practice like CK Physio. Massages, in particular, encourage blood flow to the affected body parts, thereby delivering the nutrients necessary to repair damaged tissues.

That said, groin and hip injuries are just some of the sports-related conditions physiotherapists treat every day. Since most sports include lots of running, foot and ankle injuries are quite common as well. These injuries include lateral ligament sprains, distal tibiofibular joint injuries, and serious tendon ruptures.

Depending on the extent of these injuries, physiotherapists may have to provide ankle braces, ice packs, or crutches to patients. Should these treatments prove ineffective, physiotherapists will have no choice but to recommend corrective surgery.

Even then, an experienced physio in London can help by facilitating the patients’ rehabilitation programme. Like Connor, patients who sustain groin injuries need to perform the right exercises to gradually restore normal function. Physiotherapists help ensure that rehabilitation is paced appropriately as too much and too soon may cause a resurgence of the injuries.

While Workington Town will have to do without Connor for the time being, other players on the team can learn from his example by performing stretching exercises to condition their bodies before a match. Otherwise, another player may have to sit this season out.