Holistic Ealing Physiotherapy Can Help You Endure an Incurable Disease

Tim Wotton’s lifetime battle with cystic fibrosis is truly a source of inspiration, such that the Daily Express saw fit to run a story about his life and the release of his book ‘How Have I Cheated Death? A short And Merry Life With Cystic Fibrosis’, which takes a peek into the life of a 43-year-old who survived a disease that should’ve killed him when he was 17. Although cystic fibrosis has no cure, Wotton soldiers on, hoping to reach the age of 60 and beyond: 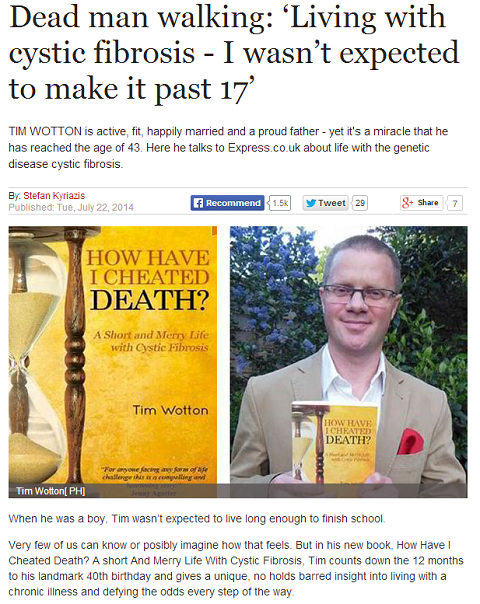 Such brutally honest, painfully practical thoughts seem extraordinary to a healthy person, let alone a parent, but to simply stay alive Tim takes more than 40 pills a day - that's over 405,000 so far in his life.

He also has to massage and clear his lungs and use a nebuliser every single day. He has to inject himself with insulin thanks to the recent onset of diabetes – a side-effect of his drug regime, along with osteoporosis. As well as numerous hospital visits, he also has to take two weeks off at least once a year for intensive treatments.

The key to Wotton’s success, aside from medicine and therapy? Humour, physical activity, and (most importantly) the desire to live another day. People suffering from cystic fibrosis shouldn’t just lay in bed and admit defeat; they need to seek professional medical help so they can cope with their condition. Patients with similar symptoms can visit a leading Ealing physiotherapy practice like CK Physio for prompt relief by means of therapeutic massages, inhalation exercises, and the like.

Cystic fibrosis is a rare genetic condition that affects about 10,000 people in the U.K. It is caused by a mutation in a certain gene known as CFTR, which regulates the body’s sodium and chloride levels. Once mutation occurs, this gene forces the body to secrete excessive amounts of mucous into the tubes and pathways, causing blockages all throughout. Although cystic fibrosis can certainly affect every part of the body, the complications are typically centred on the respiratory system. Symptoms, which usually manifest in childhood rather than later in life, include incessant coughing, recurring chest/lung infections, and slow weight gain.

As Wotton mentions in his book, daily therapeutic massages can provide much-needed relief from these symptoms, the extent of which may vary each day. Patients who do not experience any complications need only visit a holistic Ealing physio practice once a day for 10-15 minute sessions. On the other hand, those who suffer from a lung infection may need about two to four 45- or 60-minute sessions each day.